Skip to content
HomePrice to Book: Rule of Thumb

In a post on MKL’s 2013 annual report, the Brooklyn Investor said something that caught my eye:

One thing people would do when looking at financials is to use a 10% hurdle; if a company grows book at 8%, it’s worth 0.8x book. If it grows at 12%/year, it’s worth 1.2x book. Never mind if that makes any sense or not, but that’s a quick rule of thumb thing that people sometimes look at.

I thought I’d explore this rule of thumb a little bit more. This is mostly in the context of compounding machines like MKL, where we expect to hold the security for a long time.

Suppose a firm has a book value per share of $1 at time zero.

Let its return on equity (ROE) be r, and assume that it reinvests all its earnings. Suppose it is able to keep on reinvesting at this high ROE indefinitely.

Thus, the rate of increase in book value mirrors the ROE. After n years, the BVPS is:

If the hurdle rate is d, then the net present value is the book value after n years discounted to the presented time:

Next, I plotted the simple rule of thumb which suggests that the target P/B ratio may be approximated by 10r. As you see from the plot above, the rule of thumb holds up pretty well, especially for ROE near the discount rate of 10% (corresponding to the PE=10).

Mathematically, the rule of thumb can be understood/slightly generalized as follows: suppose

. Then the PV can be written as: 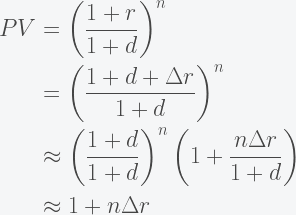 Here, I performed a linearization in step 3, and assumed

in step 4. This simple math also provides a more general rule. If you want to hold something for n years, then target P/B ratio is

If you have a calculator it is best to use the full formula,

to find out what multiple of book value to pay.

One can translate this into a PE ratio based on current earnings by simply multiplying the book value at t = -1,

. Thus, the target P/E ratio based on DCF is,