Berkshire Hathaway is a storied institution. Its rise from a struggling mill to a behemoth – the 4th largest company in the US – is undoubtedly the story of America’s most beloved capitalist – Warren Buffett.

Berkshire as a business and investment has been looked at many times by many people much smarter than me. The best thing to do, perhaps, is to link to these great resources.

In no particular order:

Berkshire is a large and complicated organization. The few times I’ve tried to look at the unconsolidated numbers, I’ve just gotten lost. Fortunately, Warren Buffett, in his wonderful annual letters, not only gives us the key numbers to plug into our calculations, but also provides a template he uses to think of BRK’s intrinsic value.

In this “two-column” method, we add up all investments and multiply the operating income by a reasonable factor (a suggested factor for growing high quality businesses under BRK’s umbrella is 10x). Using this simple framework, one can look at historical numbers (all numbers from annual reports). 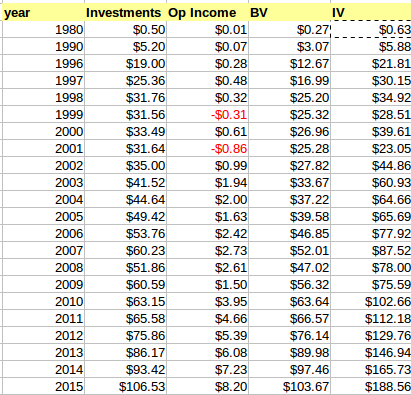 One of the few lucky things I did during the 2008/2009 crisis was to buy as much BRK as I could. My average buy price (split adjusted) was around $60.

I’ve held on to those shares, and even added a little bit around the margins. In 2011, I bought at $75, and then earlier this year I bought more at $125. I am prouder than I probably should be of my latest buy, because I did not anchor to the “low price” I had paid for most of my shares.

Five years ago, I probably would have behaved less rationally, and instead of zeroing on the discount to the intrinsic value of the business, which is all that matters really, I would have been hypnotized by the price I made my first purchase at (when everything was on the clearance aisle).

It is the stock that I have been most comfortable holding throughout the past 7+ odd years. Currently, it is my largest holding at 11.5% of the portfolio. It is nearly 15% of my invested portfolio, if you ignore the large cash position (18.5%).

I expect BRK to outperform the S&P index modestly over the medium to long term. So far I’ve been able to eke out a 15% return (which while not stellar, is my target hurdle) while being able to sleep soundly.

Due to the lower interest environment, and BRK’s size I expect a slower compounding rate in the future. In any case, I am not selling my shares anytime soon!

One thought on “Berkshire Hathaway”